Digital Art combines artistic creativity with a user experience. Through the method of expression, art has the capacity to change any viewer’s beliefs. According to Michael Mandiberg author of  article “The Real Costs” found in Net Works: Case Studies in Art and Design, the goal behind activism is to alter the audience’s view on a particular topic. [1] Giving examples like Picasso’s Guernica, Mandiberg argues that an “activist[’s] work can be strongly conceptual” as “it treats the idea of the intervention as the artistic gesture,” meaning that getting involved is an artistic action. [1] Hacktivism is the combination of the artistic aspect of involvement with digital technology. Furthermore,  the goal of hacktivism is to gain the audience’s attention to any given controversy through political protest.

The Activism Android Application (AAA) is a piece of software art created for the purpose of achieving a satisfactory letter grade (C or better) in ARTH 4482: Digital Art History taught by Professor Susan Ryan. The general goal behind developing the Activism Android Application was to mimic the concept and goals of hacktivism on a smartphone without causing a lot of public harm or pointing too many fingers. By critiquing various elements of the status quo in my app, I have successfully become a hacktivist.

Simply put, the AAA app presents the users with a mock advertisement for a target corporation or opposing organization . This mock advertisement  provides the user with an in-app hyperlink to a public webpage. In a hacktivist-like twist the app directs the user to a site in which there is a stark contrast in content to what was in the mock advertisement. For example, the app displays a picture of a hamburger. By tapping the hamburger, the app would connect the user to the full length version of the documentary Supersize Me on Youtube providing a somewhat humorous result for those expecting it and an informative experience for new users. 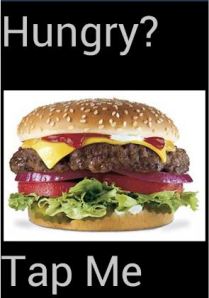 Additionally, the Activism Android App has a secondary activity in which it takes real text-only promotions from the target corporations’ websites and  mixes one promotion with expletives for humor and for shame. Unfortunately, this feature of the app is rather buggy and has been kept solely to supplement the “advertisements with a twist” feature.

At the start of development, I had a number of different technological choices on which to base my project. The easiest, and most unoriginal, would have be to create a website, but I decided against doing so as I felt more comfortable with this particular work being displayed on local hardware rather than to host it on the public web. I also could have built a traditional software application that runs on any PC or Mac. Due to PC-based software art being something that feels very 90’s, a traditional application did not seem appropriate for the year 2012.

From a software developer’s standpoint, this was a fun little Android App to create. For coding, I utilized the Eclipse IDE with the Android SDK plugin. I wrote the primary functionality of the software in Java, which is the preferred language for Android Development; and the Android SDK handles the graphical user interface with simple drag and drop XML. The app is designed for the latest Android smartphones and is only compatible with Android OS version 4.0.3 (Ice Cream Sandwich) and Android OS version 4.1 (Jelly Bean). Running the app as is on any earlier versions of the OS could compromise overall performance of the Android device (if it would even run, it was not tested for such). However, the app could possibly be overhauled backwards to run on Android 2.3.3 (Gingerbread) if necessary, but I did not see the point since Gingerbread is quite obsolete. I tested the app via the Android SDK Virtual Machine as well as by using the debugger mode on my Samsung Galaxy SII. 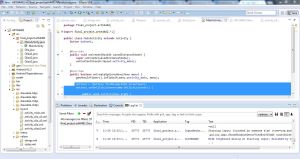 A work in progress

Implementation was time consuming, but there is nothing too special about the code. A random number generator determines which URL-containing String will be used. Each screen is a new Android activity class that is built on top of the previous class.  Being a Computer Science scholar, I am expected to write compilable programs. In a previous semester, I taught myself the inner-workings of the Android SDK. As always programming documentation is very beneficial, I used Android Developer documentation as a reference. [3]

The theory is that we are living in an imperfect world. Hackers are meant to create new works from existing products in the hopes that life in general will improve. [5] It may be a hopeless cause, humanity may have already taken a turn for the worst. Nevertheless, we shall seek to increase the quality of life until we are no more. [5]

I have always had an interest in using digital mediums as a voice of expression. For me personally, doing something incredibly artsy was not really an option. If I had attempted something vague, I risked completely missing the point of the assignment. I did have an initial concept, or rather a dream, of implementing a 3D graphics program from scratch with OpenGL that possessed the same kind of spirit as Char Davies’ Osmose or its successor Ephémère.  However, the tiny bit of OpenGL programming that I have been exposed to is not sufficient nor is building such an experience like Davies’ works even feasible for a student with enough schoolwork to barely have time to breathe.

One may ask how any of this has anything to do with 2012? My project’s relevance to 2012 is blatantly obvious, smartphones are the present and are sure to grow to be the face of digital media and digital art for the foreseeable future. Therefore, it makes perfect sense to build an Android app with the intent of such a piece of software being a manifestation of virtual creativity. Going along with the idea of keeping everything contemporary, I had to determine what world struggles I should be addressing. I decided early in development that I would focus on problems specific to American culture. The following categories are addressed: Obesity, American Education, the Economy, and Fear of Violent Video Games.

Upon searching for works similar to my own I found two that happened to share many fundamental concepts to my project.

The Android Activist Application is similar to by the Travesty Corporate PR Remixer by Amy Alexander in that the secondary activity, the text manipulation activity, has the same type of functionality. [6] Due to the numerous references to Windows XP in that particular work however, the Travesty Corporate PR Remixer is either using old URLs or they have the text hard-coded into their program whereas the Android Activist Application is programmed to pull text from the web.

Additionally, Amy Alexander’s other notable work the CueJack is also relevant here. [7] The CueCat was a device deployed by Radioshack to allow customers to scan an item and view  information relevant to the product. The CueJack is an alternative operating software for the CueCat scanner that provides alternative information . The Android Activist Application one-ups the CueJack in that AAA is extremely mobile and upgradeable, AAA provides truthful, relevant, informative opposition to the corporate powers that be, and finally, given extra-time for development, AAA is portable to any platform (Windows, Mac, Chrome, iOS, FireFox, etc.).